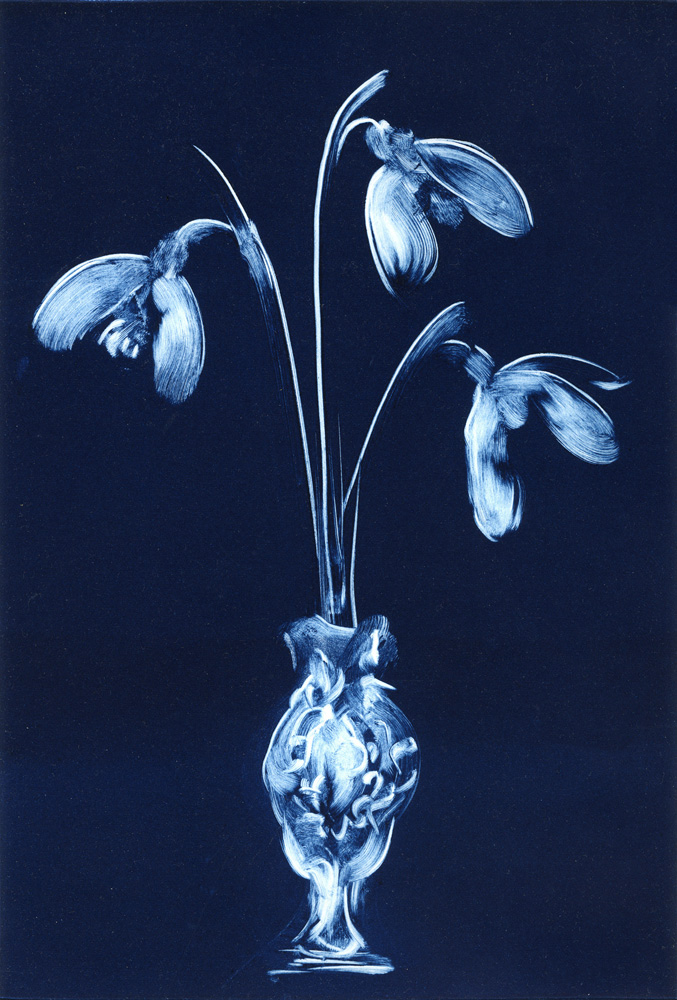 A great joy of January in England is to spot the first snowdrops (Galanthus) of the new year.  The early ones in my garden have larger leaves and flowers than those which follow later in the month and into February. Each year I choose three and place them in a 19th century silver pepper pot, an heirloom from the Law family. It’s a perfect relationship; the fresh soft green of the stems the creamy white petals and the fine engraved silver is an elegance that I have tried to portray in my monotypes.

In my garden the smaller snowdrops are now emerging and the buds beginning to show. I have thousands of these and each year after flowering, but while the leaves are still green, I will split and transplant the denser clumps so that over the years I have created drifts of galanthus around our garden. The original clump came from my childhood home and they continue to inspire and cheer even the dullest February day.

Monotypes are the most painterly of the printmaking processes. My technique is to draw into the oil based ink on a Perspex plate so removing the ink with my fingers, rags and cotton buds to create the form and subtle tones of the snowdrops. I transfer the image from the plate to Fabriano paper on my etching press. Only one print is possible from each drawn image, so each one is unique.  Then I clean the plate, re-ink it and redraw to create another image.

The original snowdrop monotypes are now available from the Brook Gallery at Budleigh Salterton. Contact details: